The Dornier-Werke had also produced a project for an aircraft intended to compete in the 1924 Schneider Trophy contest held in Baltimore. Aerodynamically of extremely advanced design, this Dornier project was generally similar in configuration to R J Mitchell's Super-marine S.4 which was entered for the contest in 1925, being a mid-wing twin-float monoplane powered by a 450 hp Curtiss D.12 12-cylinder liquid-cooled engine.

The Dornier proposal envisaged the highly unorthodox configuration of an abbreviated fuselage nacelle mounted above twin floats by means of splayed aerofoil-section struts, an engine mounted fore and aft of the pilot in the fuselage nacelle, and vertical surfaces attached directly to the tails of the floats. The proposed power plants were either BMW IX 12-cylinder liquid-cooled Vee engines with an anticipated maximum output of 800 hp at 1,780 rpm or Daimler-Benz F 2 12-cylinder liquid-cooled inverted-Vee engines with a calculated maximum output of 1,000 hp at 1,800 rpm, and these were to be mounted as a tractor and as a pusher, their airscrews rotating in opposite directions to cancel out torque. The wing was mounted low on the fuselage nacelle and wire-braced to both the fuselage and the floats; the single-step floats possessed a high beam-to-length ratio and accommodated all fuel.

A model of the Domier project was displayed at the Internationale Luftfahrt Ausstellung (ILA) in 1928, but no funds were forthcoming for the construction of a prototype. By coincidence, one of Italy's entries in the 1929 Schneider Trophycontest, the Savoia-Marchetti SM 65 (eventually withdrawn from the competition), bore a striking resemblance in concept to the Dornier project.

The Dornier-Werke's project for the 1931 Schneider Trophy contest was an all-metal shoulder-wing flying boat with retractable stabilising floats and a system of surface evaporation cooling for two 2,000 hp 12-cylinder Vee engines which, housed in the forward portion of the hull, faced fore and aft, feeding their power via a system of gearing to a vertical extension shaft which drove a pylon-mounted four-bladed pusher airscrew. The pilot was seated in an open cockpit aft of the wing, and overall dimensions included a span of 12,00 in, a length of 11,00 in, a height of 4,10 , and a wing area of24,0 m2 Estimated empty andloaded weights were 3 250 kg and 4 000 kg respectively, and it wascalculated that a maximum speed of 650 km/h would have been attainable. 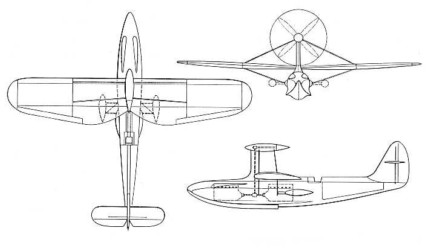 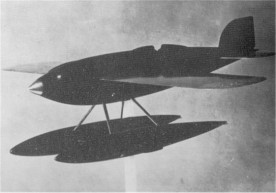